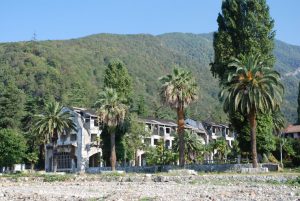 Abkhazia is a very beautiful country, and at the same time, colorful even against the background of other Caucasian lands. Holidays here are more suitable for lovers of wildlife, legends and antiquities than lovers of established service and comfort of cozy hotels.

And the sea in Abkhazia is considered the cleanest on the entire Black Sea coast, and the air with a pine-cypress aroma is very useful. However, if a lot has already been written about the beauties of Abkhazia, then they are reluctant to write about the small difficulties that tourists may have when visiting the former “Soviet Riviera”.

In this article, we will try to tell you about Abkhazian surprises that are best avoided so that the trip leaves only pleasant memories.

Some surprises will by no means be surprises for those who have already rested in the Caucasus and are familiar with the Caucasian mentality. This means – one should not be rude, provoke local residents with too frank clothes, and in no case should humiliate national dignity.

Abkhazia has its own peculiarity – residents of remote mountain villages are not spoiled by tourism and show real, disinterested Caucasian hospitality.

On the coast you need to be vigilant – and crime, and corruption, and fraud here, as they say, have a place to be. But in general, the situation in Abkhazia is calm, local residents are well disposed towards tourists from Russia.

As you know, off-season is the best time for a holiday in the Caucasus, but this rule does not apply to Abkhazia. It is better to come here, starting in mid-June, the swimming season officially opens here, the coast comes to life. There are reasons for this: the transport network, service enterprises, and tour agencies are starting to work in full. Lake Ritsa, the monastery of New Athos, mountain waterfalls are most accessible during the season. And from the beginning of September to the end of May, resort life in Abkhazia noticeably subsides.

Those who decide to come to Abkhazia by car should be careful, both when driving on serpentines, and in relations with the local traffic police. Your car is subject to mandatory registration with the traffic police of Abkhazia. Here, very high fines for violations of traffic rules, even a small speeding can cost the driver several thousand rubles. If you are stopped by traffic police, ask for a video of the violation, ask if the employees have a work order. Employees sometimes “on duty” informally, during off hours, it is clear for what purpose.

The general rule for holidaymakers in the south is to constantly wash their hands, vegetables, and fruits in Abkhazia. It is becoming especially important – sanitary standards are not very carefully observed even in public catering establishments. Wine and other drinks should be bought only bottled and factory corked. Wine is bottled, including the famous Abkhazian “isabella” – most often pure “chemistry”, a substitute for powders.

As for food, do not neglect the traditional dishes of Abkhaz cuisine: khashlama, khachapuri, dried buffalo, smoked cheese and spicy beans (as lobio is called here). It is very tasty, nutritious and not at all expensive.

In general, possible unpleasant surprises should not distract from the beauties and sights of ancient Abkhazia, this country is in any case worth spending your vacation time on it.