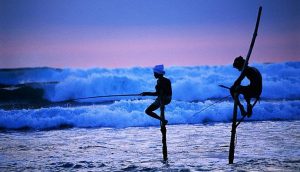 Sri Lanka attracts divers from all over the world with a variety of corals, marine inhabitants with unusual names and species (angelfish, Moorish idols, parrot fish), dolphins and whale sharks, which can be seen from March to April. But the main feature of diving in Sri Lanka is a visit to underwater rocks, grottoes and wrecks. About 20 dead ships of the 19th and 20th centuries are open for inspection at depths from 8 to 30 meters. These are tankers, steamboats, bulk carriers, merchant ships, and even a modern cargo ship. Many of them are well preserved, and you can even swim with them inside.

Amazing variety of seafood in fish markets in Colombo or Negombo. An early morning visit to the fish market itself is already a fascinating tour, but it is much more interesting to take part in fishing yourself.

Fans of extreme relaxation in Sri Lanka can offer rafting on the mountain river Kelani. The duration of rafting is determined by the tourist himself – the choice of programs here is very large.

2-3-hour river safaris are also popular with tourists. The most interesting in this respect is the Bentota River (although other rivers are also of considerable interest, for example, Kalu Ganga). In the river and on its banks there are quite a lot of diverse animals – lizards, crocodiles, small species of monkeys, and many birds. The banks of the river are covered with mangroves.

On the island there are several beautiful golf courses of international standard, in which you can take a training course.

On the coast of the country, both in the west and in the east, there are many places suitable for surfing, but still the most popular of them is the Hikkaduwa coast. Wide beaches, crystal clear water, the scorching sun and excellent surf made Hikkaduwa the main refuge for surfers. From October to April, the wave size here is from 1 to 3.5 meters, and the wave structure allows the surfer to move in both directions. In the Hikkaduwa region and further south, there are about 12 points for good surfing, the most popular are Mirissa, Midigama, Kabalana (the place for the party of surfers is the Kabalana Hotel).

Between April and October, the best place for surfing is located on the east coast, in Arugam Bay, near the town of Pottuvil. Arugam bay Surfing Beach is the most popular party place for all surfers in the summer. There are at least 6-7 great surf spots in Arugam Bay, some of which are up to 1 km long. The average wave size here is from 1.5 to 3.7 meters. Most of the places here are not as crowded as on the west coast. The most popular points are Arugam Bay Main, Pottuvil, Okanda, Crocodile Rock.

Up Last changes: 04/26/2013
USEFUL AND INTERESTING INFORMATION
In markets, in private stores, etc. You can bargain about the price. You can reduce the price by 30% from the initial one. However, this is unacceptable in government stores, supermarkets, shopping centers and duty free airport stores.

Despite the small likelihood of theft on the island, luggage should not be left unattended, as local residents may suspect that it contains explosives.

If you do not want to be detained, searched or interrogated, do not take pictures of power plants, port facilities, airports, military units and railway stations.

Sri Lanka is a country with a hot climate, so in order to avoid stomach infections and poisoning, you need to thoroughly wash your hands before eating, as well as vegetables and fruits bought in the market. Tap water for drinking is not recommended: it is better to use mineral water and other factory-bottled drinks.

In the evening and when visiting national parks and reserves, it is recommended to use repellents. Before you travel to the jungle overnight, tourists should take antimalarial pills in advance. Do not go to temples in shorts, in clothes with an open back and shoulders. Also, when entering the temple you need to take off your shoes.

Watch out for monkeys! Numerous flocks of which have become in Sri Lanka a kind of natural disaster. They scurry around and are very intrusive. They can wrest food or things from their hands, right down to the camera or camcorder. Moreover, monkeys can climb into a hotel room and arrange a uniform pogrom there. Therefore, before leaving, always close windows or special mosquito frames with a net tightly.

Outside the center of Colombo, “nightlife” is absent, basically any activity on the streets (trade, work of institutions) stops when the sun sets at 19 p.m.

You should be careful when using gestures familiar in Russia: the gesture of the middle finger is analogous to a gesture that is performed by squeezing a palm turned upwards into a fist and protruding the index finger up.

Posted in crystal, get a room, more people, they have the opportunity, vegetables and fruits
European brands which keeps many their health compresses very tasty cleared of corals All Saints Cemetery city are visible sandy beaches really large Adriatic coastline wedding exactly supermarkets and restaurants party place not accepted her memory in Nice itself unfamiliarity famous beach and it is impossible European stomach inverted cone local aristocracy fresh sea mountain river Kelani compliance you will be surprised super-free customs the resort service National Library House which contains entertainment pensions and motels. Hinek Berka really is something Chomutov Moravian Museum condition after surgery chemical composition title of capital mandatory registration northern part of Brittany but the bulk cafes effect of ionizing menopause) Many stay semi-legal is simply huge arrived in Vietnam restaurants numerous hotels treats diseases old streets but there are also doubt organ dysfunction street thieves various types it is especially well as riding
<a href="http://thisismyurl.com/downloads/easy-random-posts/" title="Easy Random Posts">Easy Random Posts</a>
condition after surgery treats diseases European brands mountain river Kelani pensions and motels. Hinek Berka northern part of Brittany which contains wedding exactly European stomach not accepted supermarkets and restaurants sandy beaches inverted cone really is something and it is impossible restaurants effect of ionizing Many stay All Saints Cemetery title of capital Adriatic coastline numerous hotels is simply huge menopause) Chomutov but the bulk party place compresses chemical composition well as riding organ dysfunction in Nice itself various types local aristocracy really large fresh sea their health you will be surprised compliance her memory Moravian Museum doubt cafes the resort service
We go to Finland by carAnd indeed it is very convenient, because from St. Petersburg to Helsinki you can get there in just 5 hours, and from Vyborg in 2-3 hours. Plus, you do not…